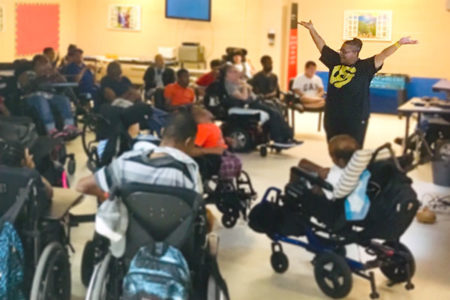 Inspired by a staff member’s loss, members of ADAPT Community Network weekly flock to a popular coping class at 175 Lawrence Avenue to share their feelings on diverse topics.

In December 2018, ADAPT Community Network staffer Simone Eley lost her dad. “I would come in very temperamental,” says Simone. Her loss triggered an outpouring of concern from the persons supported at 175 Lawrence Avenue, where she works as a Habilitation Assistant. It also sparked an idea from her supervisors: Director Kelly Spina and Assistant Director Alicia Holness encouraged Simone to start and lead a coping class for the people supported, as an opportunity for them to express their emotions regarding their own life circumstances.

Although initially reluctant, Simone proceeded with the workshop: “We don’t know what the people supported go through either.” News of the workshop, begun in January, peaked interest. Curious attendees spread the word to their peers. Before long, a group of attendees from Brooklyn Day Hab 1 and 3 became a dedicated community who each Friday flock to 175 Lawrence Avenue’s multipurpose room/cafeteria—the biggest room available to them. They sometimes fill it to capacity, with 50 to 60 people!

Attendees listen to music prior to entering the Friday workshop, at which they recite affirmations from YouTube and discuss diverse topics, including feeling about employment, the heat, their disabilities, and about ambulating in wheelchairs. The people supported come up with the topics; Simone does the research and then a group discussion ensues. “Coping group calms me down on a Friday,” says workshop attendee Denise. “The topics are interesting and I can relate to them. I am learning to deal with my emotions.”

According to Simone, people supported aren’t the only ones benefiting from the group. She says the Friday group has become an outlet for healing for herself and for other staff whom accompany the people supported and participate in the group as well. Says Simone: “[Staff] have come up and asked for affirmations and also do videos and will watch and talk about it in the hallway.”

Kelly is proud of the results. She says people are getting to know each other (including new staff) better, they are learning how to “manage day-to-day stressors,” and that people supported “become more communicative and less explosive. It helps them to understand where feelings are coming from.” Due to its popularity, plans are in the works to start a second class and to also offer coping workshops in other day programs.