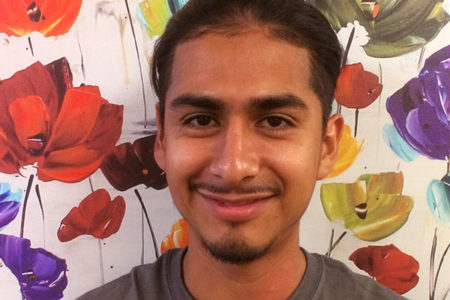 Erick Camarillo excels as a Direct Support Professional at ADAPT’s Waterside Residence after a successful stint as an intern.

Erick Camarillo admits that he was unfamiliar with ADAPT Community Network until he learned about an internship opportunity here through his high school. But Erick would soon learn many things when he became an intern at ADAPT’s Waterside Residence in Manhattan in 2018. “I was introduced to the basics, which matter the most, and was helped to understand the meaning of what it is to support people at the residence and work as a team,” says Erick.

After having interned for about a year, Erick learned something else:  He wasn’t ready to say goodbye to Waterside, where he says he enjoyed how the staff were “working together to make dreams and goals possible for the people we support.”  He applied for a full-time position. Senior Coordinator of Operations Matt Parascando was all too happy to hire him. Says Matt: “His commitment to the mission of ADAPT and the people we support was evident from when he was an intern and has only continued as an employee.”

Erick became a Direct Support Professional (DSP) at ADAPT’s Waterside Residence in May.  His responsibilities include providing care and assisting with personal development and independence of residents, attending to their personal hygiene needs, and performing housekeeping, cooking, laundry, and light preventative maintenance duties. Matt says that Erick’s personal touch shines bright to fellow staff as well as to people supported: “Watching how he connects with, listens to, and values people stands out and is something every employee should have.”

Waterside resident Davnel S. agrees: “I like Erick because he listens to what I want and helps me.” Erick says the pleasure is all his: “I am so content because I can help someone reach their goals and potential. At ADAPT, I am looking forward to growing every day.”

According to Matt, Erick sets a fine example of what can happen when people intern or volunteer at ADAPT—that such an experience can lead to a full-time job at an Employer of Choice. ADAPT’s Workforce Development department plans to launch a new volunteer and intern program in the fall. It is hoped that candidates who possess the attributes that make Erick such a quality employee will sign up. If you or someone you know might be interested in interning or becoming a volunteer, please contact Bobbi Jo Yeager at 212-683-6700 x1213 or byeager@adaptcommunitynetwork.org.