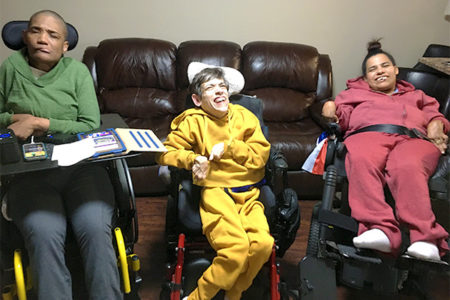 ADAPT acquires a new residence in the Bronx, allowing three people supported to transfer into a private house, and each gets their own room.

On October 8th the three-bedroom house, located at Pratt Avenue in the Bronx, was certified by the New York State Office for People With Developmental Disabilities (OPWDD). Three women–Karen M., Deborah R., and Hirba R.– transferred there from other ADAPT locations. The ladies happily settled into their own respective bedrooms and new home. “All three ladies love it,” says Stacey Mason, Coordinator of Operations. “The ladies like how [it] is decorated, the colors, the way they have [it] set up. One of the ladies said it’s nice and quiet.”

The opening of this residence was the result of a group effort that included ADAPT’s Chief Executive Officer Edward R. Matthews, Chief Operating Officer Linda Laul, along with a team from Bronx IRA–the Residential Director, the Residence Manager and Case Manager–plus Building Services, Operations, and Vice Presidents. Two of the women moved in on October 31st, the other on November 1st. Says Stacey: “One lady was in Respite but now she has someplace to call home. The other lady is now getting the support to help her be as independent as she can possibly be again. She was independent but her health began to fail.” The third person supported lived for several years in one of the residential houses and had said that she wanted a change.

Remodeling took seven to eight months. Modifications that were made include a roll-in shower in the bathroom plus an outdoor ramp. Says Stacey: “[We] plan to make it totally accessible via technology. They have a WI-FI microwave. We have Alexa [virtual assistant].” The women are also getting better acquainted with their surroundings. “They met a neighbor, built a rapport,” says Theresa Burrell-Calhoun, Residential Director. “They’re still learning about their community and merchants.”

ADAPT Community Network provides a variety of housing options for people with intellectual and developmental disabilities to help support their needs. For more information about living options, contact Project Connect at projectconnect@adaptcommunitynetwork.org or 1-877-827-2666.