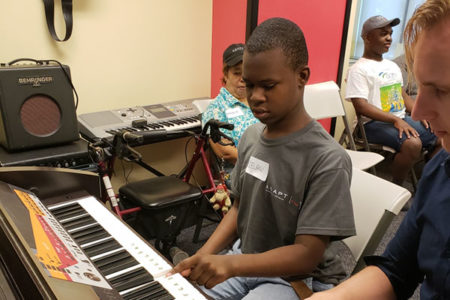 Our Brooklyn teens enjoyed this year’s A.C.T.I.O.N. (Adolescents Coming Together In Our Neighborhood) Summer Camp, a two and a half week summer camp which took place at the end of the summer.

This year, the team included activities with the music specialist Jesse and media arts activity specialists, Adewale. Participants were able to “Mix Your Beats with Jesse” and learned about creating music and beats using turn tables and a mixer. The students were then able to experiment with their beats while singing on the microphone using an auto tune synthesizer.

The ACTION Camp also took trips to the Circle Line Sightseeing and Daniels’ Music Foundation. The group took an extensive tour around New York City, viewing landmarks, including the Statue of Liberty, DUMBO Bridge and the Brooklyn Carousel. Daniel’s Music Foundation has become a yearly partner for the camp, so teens can enjoy music, dancing and singing. Campers made music with different instruments such as drums, tambourines, pianos and shakers and enjoyed a dance party at the end of the visit.

During the second week of the camp, the participants went on trips to the Children’s Museum of Arts where they enjoyed hands-on sensory art exhibits and iFly where they experienced the excitement of adaptive indoor skydiving. They also saw a performance from entertainment basketball players: the Harlem Magic Masters where the famous players performed basketball tricks to the rhythm of the music and even got to be a part of the act.

The final week campers enjoyed a field day in the park, getting wet with sprinklers and playing games. They were learned about photography and how to make YouTube videos ADAPT’s media arts specialist. The camp ended with a fun trip to Brooklyn Boulders where everyone participated in adaptive rock climbing.