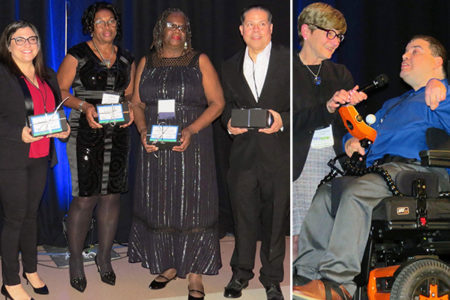 On October 28- 29, 2019, the Cerebral Palsy of New York State held its annual conference in Saratoga Springs, New York. Members of ADAPT staff attended two days of workshops, educational sessions, and meetings based on essential topics for people with disabilities.

Our very own Paul Tudisco was awarded the prestigious Al Felmet Achievement Award, which is presented annually to celebrate people with cerebral palsy whose achievements are an inspiration to everyone. Al Felmet was a Board member from Buffalo who was active in the establishment of Cerebral Palsy Associations of New York State.

Paul was nominated by ADAPT Community Network and was selected by CP of NYS as the award winner for 2019. He was recognized for his extraordinary achievements and advocacy for others with disabilities. His work with ADAPTs Disability Awareness Training, teaching community members how technology can break down barriers for people with disabilities, promote understanding and inclusion in addition to inspiring his peers at ADAPT Community Network. He also works with educational institutions like New York University to teach students about disabilities.

Mr. Tudisco is also an entrepreneur and successful businessman. He invented, and holds a patent on, a device called a Limitless Stylus that makes it possible for people with limited hand mobility to access devices and forms of communication previously unavailable to them. This device drastically enhances their quality of life. ADAPT is so proud of Paul’s contributions to technology and to the cerebral palsy community!

ADAPT staff members were also awarded during the conference. Nicole Pagano, Director of Family Services; Jackie Lucas, Director of Curriculum and Training; Edris Dookie, Habilitation Assistant at Brooklyn Day Hab 1; and Wilson Mendez, Financial Technician for Payroll accepted staff recognition awards from CP of NYS for their outstanding efforts throughout their years at ADAPT Community Network. We are pleased to have such passionate dedicated staff that makes tremendous contributions to persons supported as well as its staff and community as a whole.