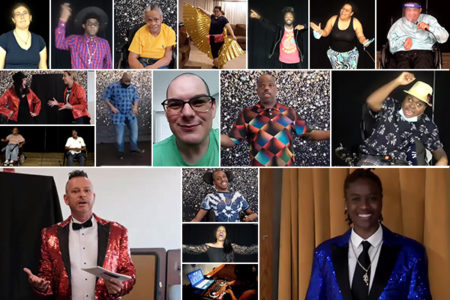 On June 23rd, 2020, ADAPT hosted its first virtual talent show. While this may have been ADAPT’s first time conducting the show remotely, it was the 9th annual “ADAPT’s Got Talent” show. There were 16 acts in all. Including 10 acts of people supported and 6 acts from staff. The participants were being streamed from two of ADAPTs programs, one in our Day Habilitation program at 5030 Broadway in Manhattan and the other at 175 Lawrence Ave in Brooklyn. Some participants prerecorded their performance while others streamed live from their homes. ADAPT wanted to ensure social distancing was being followed correctly and ensured performers had PPE and were keeping 6 feet distance from each other.

Our celebrity guest, Tamsen Fadel from PIX 11 news, kicked off the show by welcoming everyone to the show and sending well wishes to all the performers. Michael Matrone and Alicia Angevine hosted the event and announced each act while facilitating excitement and fun throughout the show. Michael Matrone gave a heartfelt dedication stating, “The talent show is dedicated to ADAPT’s Direct Support Professionals. They have been supporting people served at ADAPT during the pandemic, some caring for those who are ill, and in some cases, staff were ill themselves. Direct care workers, without you, we would never be able to make it through the pandemic.”

There was a wide range of talents showcased during the show, including singers, dancers, a DJ, rappers, comedians and even a circus act! Each participant brought their skills to life on stage and let their personality and flair seep into their well-practiced performances. There was also a knock-knock joke contest and a video of staff and people supported singing and dancing along to “We Are Family” by Sister Sledge. Needless to say, the hundreds of viewers who attended were engaged from start to finish.

Edward Matthews, Chief Executive Officer, shared warm sentiments with the performers and audience. He congratulated the participants on all their hard work and thanked the Community Outreach team and all those who helped to make the show possible. He referenced the added challenge of producing the show remotely from numerous locations. “It shows how we all have adapted,” he stated. “Not only are we getting through it, we are learning new things about ourselves and each other that I think will last long into the future and will be part of who we are and how we relate to each other for a long time to come.”

The judges had the challenging job of deciding the award winners. This year’s judges were Edward Mathews and Gary Dreyfuss, Senior Vice President of Human Resources from ADAPT, as well as friends of ADAPT, James Grant from James Grant Public Relations and Samantha Siberini, from Sing for Hope. There were first, second, and third places prizes given to both people supported as well as staff performers. This year there was also a “Viewer’s Choice” award, which allowed for everyone who joined the show remotely to vote on their favorite performance. Awards ranged from $50 for viewer’s choice all the way to $300 for first place winners.

This year’s big winner was Steven Freeman from ADAPT’s TOP Program, for his stellar tap dancing performance to ABC by the Jackson 5! His perfectly coordinated rhythm and movement won him a $300 cash prize. Steven is no newbie to the winner’s seat. He stated, “I was so excited I won again! This is my second time winning. I can’t wait to spend my money!” Steven started tap dancing in 2017 when he began lessons at ADAPT and noticed he had a natural talent. Steven says, “I got the talent, I got the skills, and I like to work.”

Laura Hickman, Senior Vice President of Marketing and Fund Development and Lauren Petrin, Senior Vice President of Finance, took first prize for staff awards for their cringe comedy themed “Circus Act.” The duo host WACN’s The Overview show and previously performed together in the ADAPT’s Talent Show in 2013. They won third place for their “Got Magic” Act, where we first learned of their tomfoolery and comic relief. This year’s performance included “fire-eating,” “knife juggling,” and ended with Laura being “fired out of a cannon” and a rendition of “This is the Song that Never Ends.” Their performance was a hit! The two kept the audience laughing along to all their antics and creative interpretation of a circus act.

“While we love the feedback from a live audience, the virtual event gave a larger opportunity for our friends and family to see the show and more importantly, see first-hand how many talented people we have in our community,” Laura stated. “Lauren and I want to thank the whole team who produced the talent show and for the other amazing creative activities that happen each day. We are so proud to be a part of the ADAPT Community family and are honored to have the chance to be a part of ADAPT’s mission in such a direct way.”

You can catch the recording of WE GOT TALENT – ADAPT’s Virtual Talent Show 2020 on our YouTube page by visiting: https://www.youtube.com/watch?v=vkLuLKsMNXM