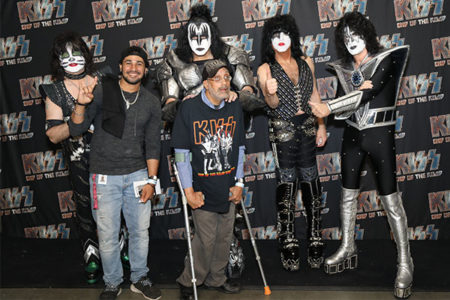 For years now, Kevin, who attends day program at ADAPT’s 5030 Broadway location, has been well-known to most in the ADAPT community for being KISS’ biggest fan. He tells everyone about his love for the legendary rock band! Last month, Kevin’s outspoken devotion to KISS resulted in a fan-tastic dream come true: two free tickets to sit in a VIP section at a sold-out KISS concert at New Jersey’s Prudential Center, and backstage passes to meet the band members!

Surprised? So was Kevin! He had tried to get tickets to see KISS on their farewell tour, but they were all sold out. Kevin’s big break came when he happened to strike up a conversation with Chris Ramirez, a manager who works at Edison Properties (also located at 5030 Broadway) and was visiting ADAPT while Kevin was attending program there. Kevin’s friendliness and his enthusiasm about KISS moved Chris to pull some strings and work with Edison Properties and Workspace Offices to get Kevin VIP box seats.

On August 14th, Kevin was excitedly enjoying the free buffet in the VIP section at the Prudential Center when he learned of the even grander surprise: his meet-and-greet with the band backstage before the concert! He received an autographed guitar pick, took photos with the band, and declared his love to the band members! Paul Stanley’s reply: “We love you!” Kevin exchanged a few words with co-lead singer Gene Simmons, who back in the 1980s had replied to Kevin’s fan letter with a message of encouragement that Kevin keeps with his other KISS memorabilia, including 36 KISS CDs: “You can be anything you want to.”

“They’re the most wonderful human beings on Earth!” said Kevin, “and I’ve met many of them, but none like this!” Meeting them was his favorite part of the concert, which he loved, that featured his favorite songs (he knows every word), fire and other special effects. He left with a KISS souvenir T-shirt, plus lots of photos and videos to remember it all by.

A KISS fan since the band’s formation in 1973, Kevin had seen the band in concert once prior, in 1984, with his mother (who also was a fan). This time, he attended the concert with ADAPT Habilitation Assistant Emanuel (Manny) Sanchez. “It was one of the moments, you can see it but not believe at the same time!” says Manny, who started at ADAPT three months ago and who himself is a KISS fan.

Kevin says that not everyone, though, appreciates KISS’ music, which he calls “real music.” “They sing about real things: believing in yourself and believing in your dreams.” Looks like KISS has provided Kevin with exactly that dream fulfillment. Says Kevin: “It was a magical night!”