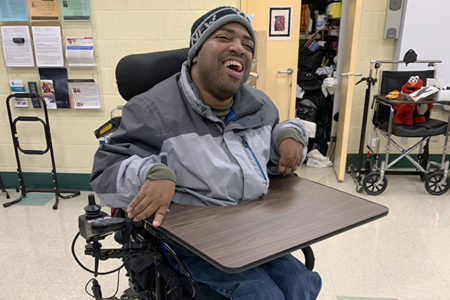 For as long as he can remember, JR Trinidad, has wanted to become an actor. Well, thanks to the help from some friends at ADAPT and a Writer/Director, JR’s dream has turned into reality… or more accurately, an acting role on a TV show called “Reality Chek”!

“Reality Chek” is a 30-minute dramatic series on BronxNet, a public, educational, and government access cable TV network in the Bronx, New York, airing on multiple Cablevision and Verizon FiOS channels. The show is described as equal parts fantasy, reality, and science fiction. Its Writer/Director, Alicia Heyward, created a role for a person with a disability specifically for JR after she learned of his interest in a part! JR plays a young poet with cerebral palsy.

This is JR’s first professional acting job. “Alicia Heyward has told me that JR has been fantastic,” says ADAPT’s Director of Community Outreach Peter Cobb. Peter supervises the agency’s Theatre Specialists and is involved in oversight of the development and performance of the plays at ADAPT, several of which JR has performed in. JR has also performed in plays at CO/LAB (Creative Opportunities without Limits And Boundaries) Theater Group, a non-profit that provides individuals with developmental disabilities a creative and social outlet through theater arts, which Peter helped JR find and enroll in.

Although the “Reality Chek” episode has yet to be filmed, JR currently spends his Saturdays in the Bronx rehearsing. He receives support from his residence’s management and staff who arrange his rides and accompany him to his rehearsals. Peter says that JR’s new acting role “has truly been a team effort.” Theatre Specialist Camila Kann helped JR create a resume and profile on Backstage, a website that connects performers to various acting opportunities. Camila also helped JR set up and prepare for an audition. Another person supported at ADAPT had the agency’s Media Arts Specialist Adewale Raji help him take a headshot and other photos of JR for JR’s Backstage profile. ADAPT’s TechWorks Center—which provides individuals an opportunity to test and borrow an array of products designed to assist and support individuals with disabilities— helped as well by lending JR a lap tray for his wheelchair, which he needed for the part.

“Reality Chek” is aired monthly on award-winning BronxNet Community Television, which provides hands-on television production training, equipment access and channels for Bronx residents. The date the episode in which JR appears is not yet available, but he couldn’t be happier with how things are progressing. Says JR: “I feel excited to be a part of a TV show. The other cast members have been great. I’d like to thank Camila and Gabbi [ADAPT Theatre Specialists] and Peter for helping make this happen.”