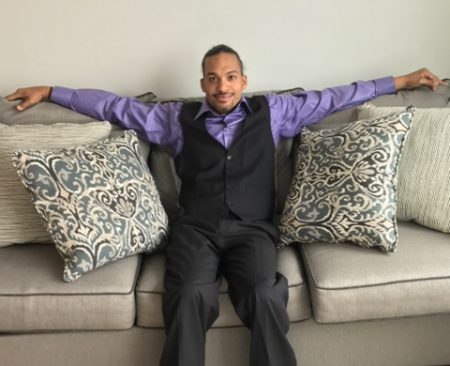 The search for housing in New York City can be overwhelming for anyone, but for individuals with disabilities, the barriers can be tremendous.  Finding and obtaining accessible housing takes determination, patience, and the right resources that few often have.

New Yorker Rafael Morales recently won the housing lottery, literally and figuratively.  After submitting over 50 apartment applications and visiting countless units, Rafael was awarded an affordable apartment from Housing Preservation and Development (HPD) NYC Housing Lottery in a brand new development in Brooklyn back in December.

Rafael first came to ADAPT Community Network from a referral from Henry Street Settlement.  At that time, Rafael did not have a stable living situation, thus affecting his emotional and physical well-being. Rafael decided to take charge and requested help from NYS Office for People with Developmental Disabilities (OPWDD). With the assistance of staff, Rafael went through the Front Door, obtained Medicaid Service Coordination (MSC), enrolled in Supported Employment, and was approved for the OPWDD rent subsidy.

Having been born with cerebral palsy, Rafael once used a wheelchair, but he now ambulates without any equipment. At home now, Rafael doesn’t have to worry about stairs being a deterrent to his access because there are well run elevators.  He also has gym in his building and is able to maintain his daily workouts.

Rafael said, “I am much more relaxed now that I have my own apartment. I don’t have to worry about when I need to go somewhere, I can just come home.” He added, “If you put in your part it makes the process a lot easier and more satisfying.”

He offered the following advice to anyone searching for an accessible apartment in NYC, saying, “Be patient. You may be frustrated, but if you don’t put in your end of the bargain, it’s not your success at the end.”

For Rafael, the sky is the limit. He is currently setting his sights on obtaining employment.  With the assistance of his job coach at ADAPT, he has already secured two job interviews.