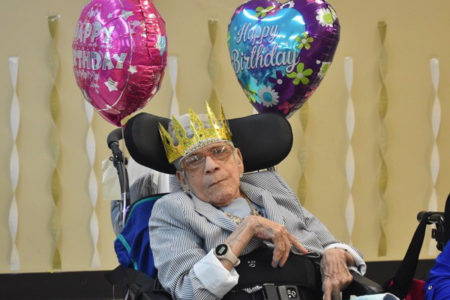 One can say Marilyn S. is somewhat of a fixture at ADAPT Community Network! After all, she has attended a day program at 175 Lawrence Avenue for 27 years, and has resided at ADAPT for 42 years! Marilyn is regarded by everyone as a gentle, sweet, and kind woman who enjoys art and poems, and always has wise words or quotes to share. So it’s no wonder, then, that when Marilyn’s 90th birthday rolled around recently, plenty of people wanted to make a fuss, and they flocked to 175 Lawrence Avenue to help Marilyn celebrate the major milestone!

Marilyn’s birthday bash took place on Friday, March 29th, a day before her actual birthday, so that program participants could attend. In all, some 160 program participants and 60 program staff joined in on the celebration, as did other friends and staff. The day program staff at 175 Lawrence Avenue planned the shindig, with assistance from none other than the birthday girl herself! It seems Marilyn, who has outlived her siblings and many other close family members, encouraged the fuss!

Says Kelly Spina, Day Program Director at 175 Lawrence Avenue: “Marilyn expressed that she feels grateful to be seeing 90. Marilyn made a speech at her birthday humbly thanking everyone that had come together to make the day special. She expressed she was overwhelmed at how beautiful the room had turned out and how many people were there to celebrate her.”

Apparently, it wasn’t just the room that got the royal treatment, filled with balloons and decorations galore, alongside a giant, delicious cake that had a picture of Marilyn’s smiling face on it. “Marilyn came in looking like a QUEEN,” says Kelly, thanks to primping from the staff at her residence. The crown she wore and the bouquet given to her from Kevin Cameron, a Coordinator of Operations at ADAPT who has overseen her housing for the last 13 years, topped off Marilyn’s royal look! Say Kelly: “She was so thankful and overwhelmed, it was a truly touching event.”