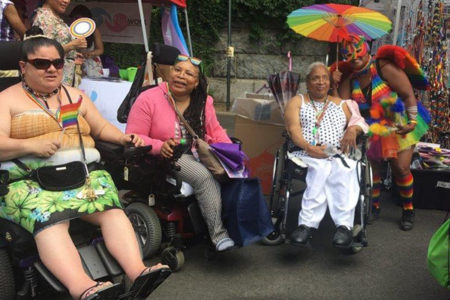 A great feature of ADAPT Community Network is that persons supported have the opportunity to participate in many different groups and activities.  One of those groups is ADAPT’s LGBTQ/Allies group, which meets every Friday at 175 Lawrence Avenue. The group’s facilitator Hans Anggraito invited the group to participate in Harlem Pride’s 10th Anniversary Celebration Day, held Saturday, June 29th on Harlem’s west side.

Five people supported and two staff from ADAPT attended, including Nadine W. , who attends ADAPT’s LGBTQ/Allies group regularly. “It was my first time at a LGBTQ Pride celebration,” said Nadine, who felt it was a trip worth taking. “I found it interesting and surprising how free and open the people were. They weren’t judgmental towards us, towards people with disabilities. The people there, in general, were very friendly. I will definitely go again!”