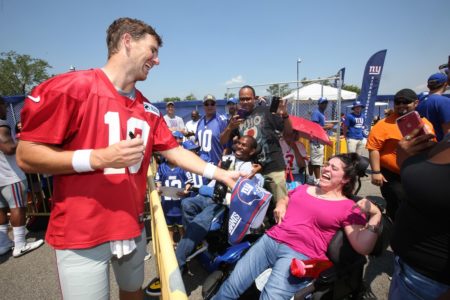 On August 3rd, individuals and a couple of accompanying staff members ventured down to MetLife Stadium for a full day of football.

Staff members Sheldon Peters and Ashanti Gorham along with three individuals: Shawn, Stephani and Samantha, headed down to the New York Giants and New York Jets training camp for an exciting day for all. They were able to get autographs from players, take photos with cheerleaders and enjoyed watching the teams practice.

Among the stars, our staff and individuals were able to meet with Eli Manning, Giant’s Football quarterback, who ranks third for most consecutive regular-season NFL game starts by a quarterback. He chatted with our individuals and gave some autographs. Manning, named the “Ironman” has been the only quarterback that Giants have known since 2004.