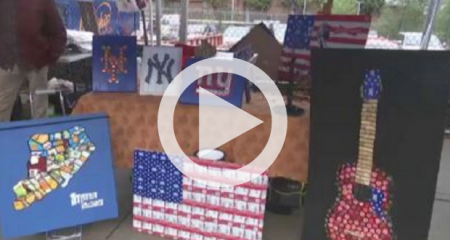 A Staten Island man with cerebral palsy is on a mission to inspire others to do great things, while also raising awareness about Cerebral Palsy.

Live music, craft beer and business owners were all part of an event held at the Flagship Brewery in Tompkinsville on Sunday.

Forty local businesses and artists celebrated all things Staten Island during the 2nd annual “Made in Staten Island” event.

“I think we have established that ‘Made in Staten Island’ is a very good thing,” said Donna Cutugno.

Cutugno and her son Devin, who has cerebral palsy, organized the fundraiser.

The disease affects his muscle coordination, but his mother says it doesn’t get in the way of his ambitions.

“Devin has graduated from college and went on to be a writer,” said Cutugno. “He wants to give back.”

All proceeds from the event will go directly to United Cerebral Palsy of New York City.

The organization helped Devin, when he was a child, bringing him special toys and devices to help him communication directly to his house.

Decades later, Devin still reflects on his experience the organization gave him.

“UCP helped [Devin] and it gave him a really good start,” said Cutugno.

“So many people are in need of just even a pencil grip to be able to write better,” said Liz Voluz of UCP of NYC. “A simple thing can really change a person’s life.”

Many at the event grew up with Devin, including Jay Sykes who owns Flagship Brewery.

“Me and Devin went to St. John’s University together. We were in the same classes years ago. I’ve known Devin for a while,” said Sykes. “For him to be able to be out and give back to the people that helped him out is a fantastic thing.”

Chris Veasey says the event itself was a big help to him. He sells beer and wine-related artwork online.

“I think it’s fantastic,” he said. “I think this area is long overdue for a great overhaul and it’s making a big comeback.”

Devin said he will continue to give back to the community because they have been there for him all of his life.
WATCH VIDEO