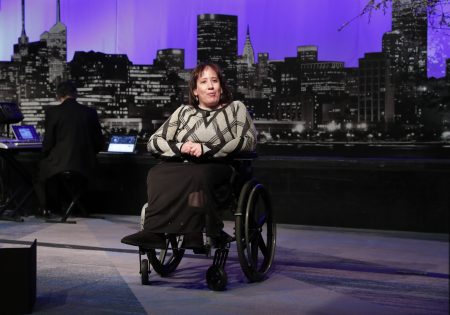 In his keynote, Edward R. Matthews, CEO of ADAPT Community Network, addressed the excited crowd and spoke about his vision for the new direction, while also recognizing the accomplishments of the many remarkable leaders of UCP of NYC and moments that have paved the way for the new era.

“Disability is simply an outdated and antiquated notion,” said Matthews. “That being true, so is identifying ourselves by one of them. If we are asking the world to ADAPT to us, then so must we ADAPT to it.”

“Nowhere in history that I know about, has a new challenge ever been met by old ideas,” said Matthews. “Value based outcomes, partnerships, and real innovation will be the success stories of the next generation.”

The evening’s program included a premiere of a new agency film, UCP of NYC: 70 Years of Adapting, that chronicled the milestones of the disabilities movement and celebrated UCP of NYC’s impact as a pioneer of social change and leader in advocacy, education, philanthropy, technology and community inclusion.

The evening was hosted by ADAPT’s new honorary Board Chairman, Tamsen Fadal, an eight-time Emmy winning anchor for PIX 11 News and Mike Woods, Meteorologist, Fox 5’s Good Day New York — both long-time supporters of the organization. Three special guest appearances were made by Susan Lucci, one of the all-time most revered Day Time Drama stars and an advocate for disabilities; Donna Hanover, former first lady of New York City; and Maria DellaRocca, an ADAPT employee and beneficiary of the agency’s services. In her remarks, Lucci pointed out how impressed she was with ADAPT’s continuing commitment to families with disabilities. Lucci noted, “My family is part of this family,” affirming her commitment to the organization’s mission. Hanover recognized the leadership of Matthews and the advocacy of the founding family members, such as Loreen Arbus and Marty Hausman. Hanover also encouraged the audience to visit ADAPT’s new website at www.adaptcommunitynetwork.org and follow the agency on social media via @adaptwechange. DellaRocca shared her personal story as she celebrates her 25th anniversary as an employee of ADAPT this spring.

View some of the evening’s press coverage here.

SAVE-THE-DATE for the inaugural gala of ADAPT Community Network on Thursday, March 8, 2018 at Cipriani 42nd Street.