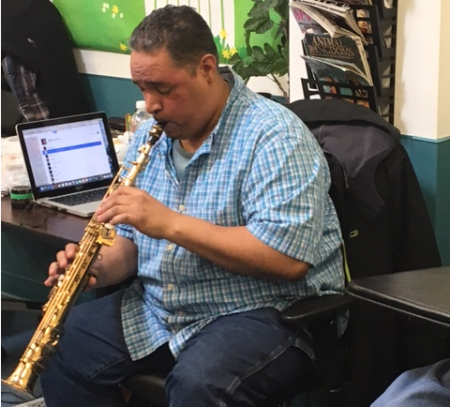 International Women’s Day held in March is a global celebration that aims to inspire women in countries across the world. The tradition began with the first National Women’s Day in 1909, and its roots are in campaigning for better pay and voting rights for women. March, in the United States, is also Women’s History Month.

Paul, who has been playing the Soprano Saxophone for over 30 years, held a concert at the day program to honor the extraordinary achievements of women.  The human service – and disabilities sector, in particular – is largely dependent on the critical work of women DSPs who take care of the everyday needs of our individuals.

Paul wanted to find a way to show his appreciation to his female colleagues.  He brought in his Saxophone and held a Jazz Concert for all the female staff as well as individuals.

Paul stated, “My wonderful colleagues are thoughtful nurturers who do a fantastic job ensuring that all individuals served as well as staff feel like they are part of the 154th street family”.  “My colleagues go above and beyond their work duties. I wanted to show my appreciation during Women Appreciation Day.”

According to the US census, one-in-four women in the U.S. report having a disability. As mothers, sisters, daughters, and contributing members of this great nation, we seek to break barriers to access, and join others who want inclusion, independence, and full enjoyment of citizenship at home and around the world!